The internet demands a reality TV show where Flat Earthers...

It’s very interesting that, despite having increased access to information, so many Flat Earthers have shunned facts and logic in favor of one of the most strange and elaborate conspiracy theories in the history of conspiracy theories.

But hey, let’s give them credit where credit is due. They are hecking creative. After all, I never would have thought to suggest that the Earth is actually shaped like a donut. 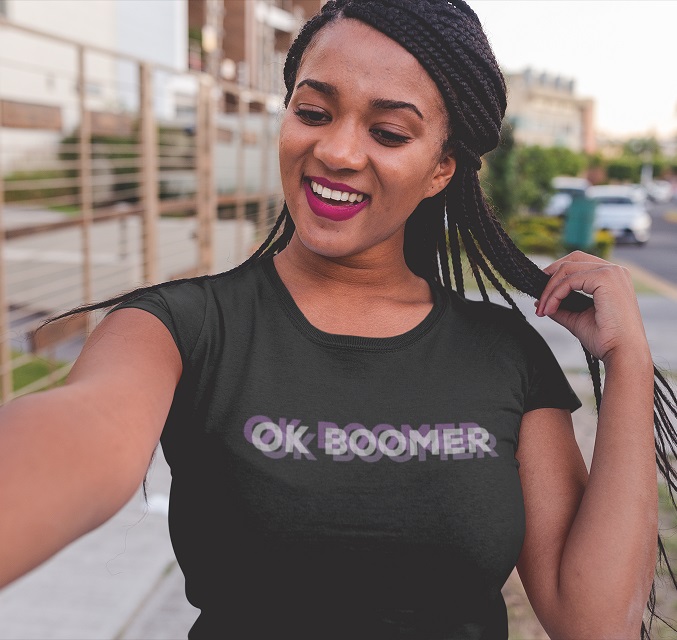 Get our OK Boomer shirt, on sale now right here!
And don’t forget to check out our other designs in our store!

If only we could redirect the effort they put into their creativity for something useful. Something like… A reality TV show where Flat Earthers search for the edge of the world.

That’s exactly what one user on r/ShowerThoughts suggested, and I think it’s an absolutely fantastic idea.

There should be a reality show where flat-earthers have to find the edge of the world.

They won’t find the edge, but we’ll get a candid view of their thought process and logic. And it’s a race to find the edge – so of course each team wants to be part of the expedition to make this historic discovery! And while doing so, they’ll travel to exotic places all around the globe, exploring new cultures and trying new food. And the whole thing will be a goddamn trainwreck to watch.

They could take measurements of the sun’s position at a specific time from all around Earth as they travel. In the process of doing this, they would debunk their own argument that this gif below is how the day/night cycle works:

What’s causing the sun to go in a circle? What causes the moon to do the same? And what about times that the moon rises during the daytime and is clearly visible during the day? Pssh. You’re thinking too much.

It would be must-watch TV

Many Flat Earthers believe that the reason water from the oceans don’t spill off the (flat) Earth is because there’s an enormous ice wall holding everything in. What’s keeping the ice frozen? Who knows.

Beyond the ice wall is a topic of great interest to the Flat Earth Society. To our knowledge, no one has been very far past the ice wall and returned to tell of their journey. What we do know is that it encircles the earth and serves to hold in our oceans and helps protect us from whatever lies beyond.

This is the basis for a great fantasy novel! I bet it would sell if written as if it is about our earth told by an unreliable flat-earther narrator. [Source]

For one of the shows, they could take them to the glacier, and they will think that they found the ice wall. Then they could get into a helicopter and go up-and-over the wall to see that it’s not.

Discovery. Intrigue. Heartbreak. All parts of the struggle that producers of the show could highlight very well for TV viewers.

BigThink weighed in on the subject, too:

Your basic flat earth belief kit often stems from biblical references, such as one, apparently, that mentions a giant tree that’s supposedly visible from all corners of the Earth — at its “farthest bounds.” If the planet was spherical this would not be possible while a flat Earth allows for such a scenario. Other beliefs that go along with this include claiming that gravity isn’t real and that a Game of Thrones-like wall of ice surrounds the rim of the disc-like Earth. This wall is Antarctica while the Arctic Circle is the disc’s center. If you went over the wall, you would fall into outer space or end up on an infinite plane. But, as the Flat Earth Society site admits, “To our knowledge, no one has been very far past the ice wall and returned to tell of their journey.”

Of course religion is involved. Why wouldn’t it be?! It truly poisons everything.

Any way you look at it, as played out and tired as the jokes about the Flat Earth conspiracy (or the “dihydrogen monoxide” conspiracy for that matter) might be, I think they serve an important purpose as a gateway drug into the world of skepticism for many people. It’s important to help others value facts and evidence if we want to win the battle against bad ideas.

And I think one of the best ways to kill a bad idea is to expose it to the light of day.